Where Would You Be? 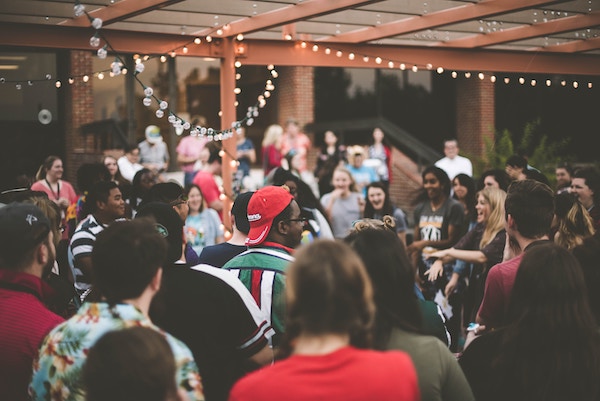 A few months ago we went for a family holiday in Cyprus. As parents of a two year old, we thought it best to go for the all-inclusive package holiday option, which would not be our natural choice. The resort was lovely and we had a great time. However, being a mostly British resort hotel and being all inclusive, it did attract a very interesting clientele! It was also a destination for large wedding parties, which meant that each day a wedding party would gather, drink, witness the marriage and then party, until quite late.

I have to say, to our shame, we did become quite judgemental and found great joy in escaping the hotel to do our own thing! But we were around for all the meals and the kids entertainment before heading off to bed.

One day, after a long day out, we got back to the snack area for an afternoon refuel, and when we entered the room there was an almighty buzzy noise. It was a group of Americans, they were typical Americans – loud and outgoing!

But there was something else that was obvious to me, they seemed to be Christians. This was confirmed when I met one of the group, who I knew! They were American missionaries to the middle east, and this was their annual conference. I chatted with some others in the lift, and on the whole they seemed nice enough, I was wary though, wondering how they would cope with the slightly crazy alcohol fuelled Brits!

That night another wedding happened, and this party were the wildest of the lot. They were drunk and loud! Their table was just outside the main buffet room, just where the American missionaries were. The American’s were not drinking alcohol, they hit the unlimited coke machines hard!

As I sat on the other side of the restaurant watching this weird juxtaposition, I wondered where Jesus would be. Would he be with the tee-total missionaries talking about God and theology, or would he be amongst the wedding party?

When we limit Jesus to just church activity, we go against Jesus as he revealed himself to be. Too often Christians are seen as the kill-joys, yet the man they followed was never a kill-joy but the source of joy. If we really want to see people come to know Jesus, then we need to reveal the Jesus who was revealed in scriptures; no he never sinned, but he spent most of his time with what the religious people would have considered sinners.

If you were at the hotel tonight, where would you be – with the Missionaries or with the wedding party?

20 years ago Michael Shaw was the UK Marketing Manager for a large multinational software company, with a house in Surrey. He gave it all up to live by faith and is now a Baptist Minister in Devonport, one of the most deprived areas of the South-West of England.