Acts of the Imagination: Culture-making through the visual arts 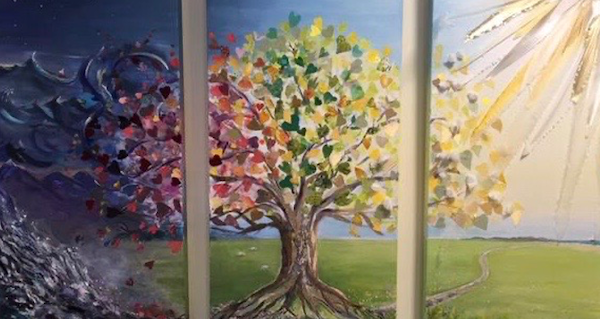 Today we’re seeing a flourishing in the visual arts and theology. For the first time since the Reformation, the church is acknowledging that visual culture may be another language through which Christians can preach the gospel in all languages. Visual artists have the chance to participate in the missio Dei: ‘the sending of God.’

The cultural context for mission has shifted. In Christendom, Christian rites, moral teachings and language were part of the culture. Today, society is being shaped less by the Christian story and more by other narratives. Bible literacy is waning; Christian church attendance has fallen; the Church’s influence has declined. To some, Christianity is seen as ‘stranded on a sandbank of social and political irrelevance.’[1]

In this new post-truth world, many seek to ‘prove’ faith and ‘argue’ belief, but perhaps we need prophet-artists who help people behold a different reality, for, as Brueggemann states, people are not changed by ‘new rules’ or ‘instruction’ but rather, the deep places of their lives, the ‘places of resistance and embrace are reached only by stories, by images, metaphors…that line out the world differently.’[2] Visual artists can commit acts of the imagination that help us see God’s activity in the world. In their culture-making, through hymns and songs, the early church countered the imperial imagination: the Christ hymn in Colossians is an example. In a world populated by images of Caesar, who held himself up as the son of God, Paul’s act of the imagination subverted cultural norms and drew others into God’s imagination.

This requires cultural engagement. For too long the Church has taken an ecclesiocentric, anti-cultural stance instead of acting as agents of change within culture. Yet Jesus instructed his disciples to be salt and light within the world:

In the examples below, the artists have sought to be culture-makers through their acts of the imagination and to bring out the ‘God-colours’ in the world.

This triptych below was created by a cross-church missional art community of non-professional artists for the breast clinic at the Royal Surrey County Hospital. The idea was conceived when an artist accompanied a friend to her biopsy results. During the long wait, they were faced with grey walls and a screen charting the slow appointment system. The anxiety in the room was palpable. The artist began to imagine what difference a painting might make to the culture of that waiting room. 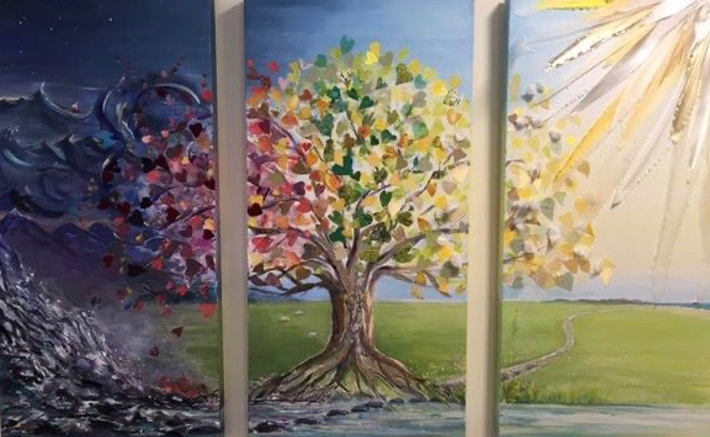 The artists approached the Matron with some sketches, and a dialogue evolved. The hospital welcomed their work and outlined constraints: no overtly Christian message could be expressed, and artwork had to comply with infection-control procedures.

The artists chose to work around the idea of ‘a tree in all seasons,’ basing their image on a well-known oak tree at a local beauty spot. They split the image into three panels. As they made the triptych, they prayed for the Holy Spirit to inspire them. They sensed themes of hope and restoration emerge, even in the storm of diagnosis and treatment. The first day they started work on this piece, a rainbow was reflected from the sky into the room. The same thing happened the day that they finished. They felt that, even in the midst of life’s difficulties and uncertainties, God wanted to hold out hope to those in the clinic’s waiting room. In this mixed media piece, gold and silver threads were woven in and jewels placed in the chaotic seascape on the left panel.

Since its installation, the triptych has been reproduced and used elsewhere in the public sphere. A copy hangs at the Royal Surrey County Hospital’s Castle Outpatients clinic and the original now hangs in a local GP surgery.

Acts of the imagination will de-familiarise conventional Christendom symbols. Once an image becomes too familiar, we often stop seeing it. The Welsh artist Stephen Owen seeks to make the cross and resurrection ‘strange’ to us again  (www.stephenowen.com). In his lectern (below), Owen carved the shape of a cross, driving a huge nail through its base, upon which the lectern balances. Lest we forget that the cross was a tool for execution, the nail jolts us back. At the bottom of the wooden base there are slits in the wood into which written prayers can be tucked. The crossbeam at the top indicates the open pages of the Bible. The shape is almost wing-like. From here, God’s Word takes flight, and will not return void. 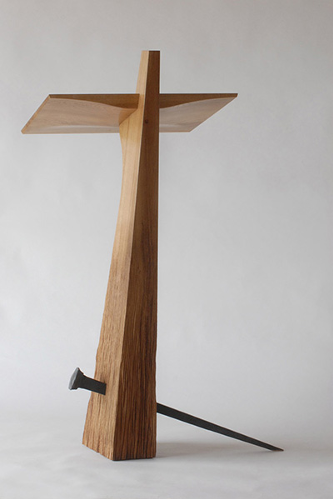 If the lectern speaks of crucifixion, the communion table (below) speaks of resurrection. The table has a gaping hole, off-centre, at its base. The table is a visual reminder of those words from the resurrection story: “He is not here – He is risen!” (Luke 24:6). Its base contains an off-centre, circular hole. The disciples’ shock at the empty tomb, the power of the risen Lord Jesus, all are echoed in the ruptured wood. The grave could not hold him. Death does not have the last word. 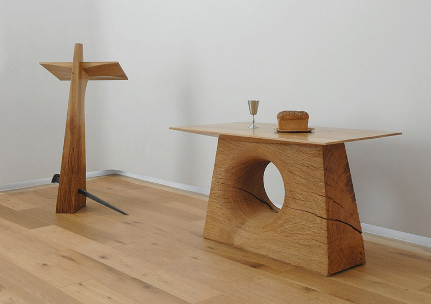 In 2019, the artwork was publicly recognised with an award from Art and Christianity (A+C) for ‘Art in a Religious Context’  (Permanent category). Reflecting on the award on Radio 4, Professor Ben Quash commented:

Christ became like us for a purpose. He became like us so as to change us into his perfect likeness.  As they extend upwards, the wood of both objects becomes smoother and more finished. As we are to do. For God is working on us, in word and sacrament, in places of encounter like this little chapel—and is transforming us from one degree of glory to another.

Sarah Corbett is the founder of the Craftivist Collective. After 30 years of campaigning through conventional activism, Corbett asked herself, ‘If we want our world to be more beautiful, kind and fair then why is our activism often not beautiful, kind or fair?’[3] Conscious of the need for something more playful and kind, Corbett founded the Craftivist Collective, which aims to create ‘intriguing activism.’ Art-makers send beautifully crafted, hand-made gifts to those in power.

Marks and Spencer were one such recipient. While campaigning for M&S to implement the Independent Living Wage, the collective organised ‘Stitch-in protests’ outside stores and sent individually-designed handkerchieves with hand-stitched messages to each of the fourteen board members. Upon agreeing to the Independent Living Wage, the CEO, Robert Swannell, stated that M&S would not have countenanced this change of policy had it not been for the collective’s intervention. The Craftivist Collective is a good example in post-Christendom of how playful, hopeful protest can bring about cultural transformation.

John Akers asks, ‘Where are the creative men and women – the writers, the artists, the filmmakers – who will capture the imagination of our confused world in the name of Christ? Where are those who will expose by their work the vanities and contradictions of our age, and affirm with all the skill they can muster that only in Christ ‘are hidden all the treasures of wisdom and knowledge?’[4] We need to pray for and encourage our artists in their vocations as they subvert and re-imagine the world.

From the beginning, human beings were invited to be culture-makers. God did not merely make nature; He encouraged Adam and Eve to make culture from nature.[5] All this culture-making will finally reach its telos when Christ returns, where we find ourselves in a garden-city, crammed full of culture. As we participate in the missio Dei, our acts of the imagination can anticipate that day.

[2] Brueggemann Finally Comes the Poet (Minneapolis: Augsburg Fortress, 1989), pp.107-8. Although Brueggemann writes from more of a Christendom context, primarily addressing the church community, his argument is pertinent in post-Christendom.

Karen Case-Green is assistant pastor at Millmead Baptist Church in Guildford. Karen has co-authored 'Imaging the Story', a course which traces the salvation story through the lens of the arts, and has contributed to other books. Her passion is social justice. She also likes chocolate, Whitmoor Common and poetry.