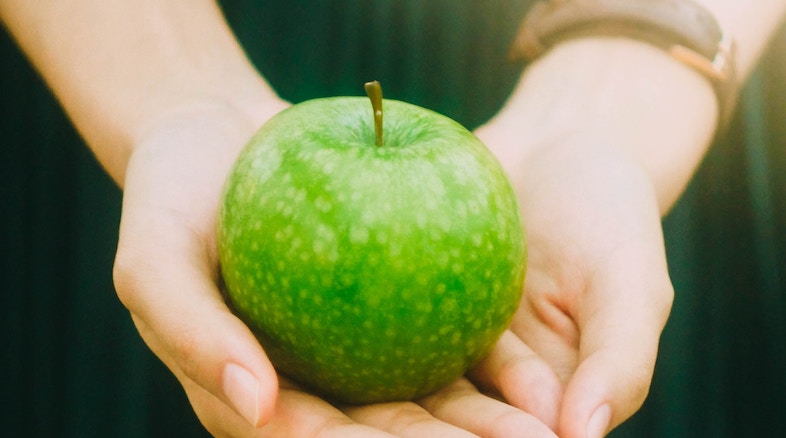 I had been invited to speak at a men’s supper in a village close to where I was living in Milton Keynes.  Linked to the local parish church, it included people from church and the wider community, some of whom worked in farming around the village.  A small gathering in some one’s dining room.  The food was excellent, which always makes for a memorable occasion.  More memorable were the questions I was asked during the meal, including “what is your greatest climate sin?”.  And then there was the incident with the apple!

I had brought the apple along to explain the science behind the Green House Effect.  If you ask people if the Green House Effect is a good or bad thing, the common reaction based on what they have heard in the media is that it’s a bad thing.  Yet, that’s fake news, taking away from the glory and wisdom of God expressed in creation.

Imagine we shrunk the Earth to the size of an apple.  Then the atmosphere on which we depend for life would be about as thick as the apple’s skin.  You can see how thin it is on photos of the Earth from space – a thin blue line clinging to the side of the planet.  And thank God for it.  Without that covering, planet Earth would be 30oC colder.  Instead of ice only at the poles, the whole planet would be a white frozen snowball spinning in space.   But this thin covering of gas traps heat from the sun allowing abundant liquid water, transforming our planet into a “blue marble”.

Or should that be a “blue marvel”?  The Green House Effects is one of the wonders of creation – something to praise God for.  Yet of greater wonder is that 99% of the gases in the atmosphere – Nitrogen and Oxygen – play no part in this.  It’s the less than 1% – mostly water vapour and carbon dioxide – that do all the work warming up the Earth making life possible.  Mirroring Jesus parable about the mustard seed – ‘The kingdom of heaven is like a mustard seed, which someone took and planted in his field.  Though it is the smallest of all seeds, yet when it grows, it is the largest of garden plants and becomes a tree, so that the birds come and perch in its branches.’  (Matt 13v31,32)

So, if the Green House Effect is such a good thing, what is all this fuss about it causing climate change.  Well, things are very finely balanced.  As naturally there is only a small amount of powerful carbon dioxide in the atmosphere, adding more – so far about 40% more over the past two hundred years – makes a big different causing the planet to warm.   Small and powerless that we feel at times, we have the power to re-shape creation.  The Green House Effect is God’s gift, but push it beyond its natural boundaries and it becomes a curse to humanity and nature.

As I said last month, we can feel powerless on our own to do anything.  We are all caught up in ways of life that act to increase the amount of Cardon Dioxide in the atmosphere.  What “was my biggest climate sin?”.  Confession time again.  That week I had just booked tickets to fly to Australia to visit friends, a confession that brought some laughter at my expense.  Admitting our powerlessness and our need for help it is the next step towards freedom; “We come to believe that a power greater than ourselves could restore us to sanity”.  And this is where the apple comes in again.

After a lively discussion, the final questioner asked, “What is the biggest issue with climate change?”.  As I lifted the apple and took a bite out of it, the room went still.  They knew enough of the Bible’s creation stories to recall the eating of forbidden fruit that marks the break of humanities relationship with God.  And around that table, we all knew we carried our own climate sins.  Powerless before the temptation, we had all taken bites out of the apple.  Bites that led to the cursing of the Earth.

Small though we are, we are not powerless to change the face of the Earth.  Yet, we are powerless to control both those changes and the inner desires that drive them.  But, “when we were still powerless … God demonstrated his love for us in this: While we were still sinners, Christ died for us … For if, while we were God’s enemies, we were reconciled to him through the death of his Son, how much more, having been reconciled, shall we be saved through his life!”  (Rom 5v6-10, part) Perhaps it’s confession time again.  To come before the God of the wonderous Green House Effect and believe that with his help, in Christ, God can restore to sanity for the sake of all the Earth.

This is the second post from Dave in a twelve month series exploring how the path of the “Twelve Step” programme might help us towards greater freedom for ourselves and creation that Jesus came to bring.

Dave Gregory is Ministry Team Leader at Croxley Green Baptist Church and a recent President of the Baptist Union sharing around the theme of “Divine Windows – Glimpses of God through Life, the Universe and Everything”.  He has a background in weather and climate research and is on the board of the John Ray Initiative – Connecting Environment, Science and Christianity.  Dave continues to take an interest in how science might shape Christian mission, ministry and spirituality in the 21st century.  He also leads the Messy Church Does Science programme.